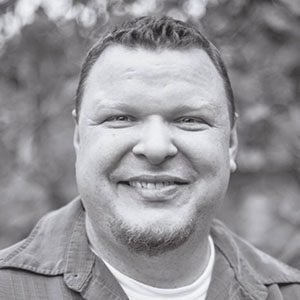 I grew up in a Christian household. My dad was a preacher; my mom was a church secretary. My family attended church every single time there was a meeting or event, and I was taken along with them throughout my childhood.

My parents didn’t know it, but at a very young age – three or four years old – I began being sexually abused by some older kids in my neighborhood. That caused a tremendously deep sense of shame to develop within me that only seemed to grow as I got older. That trauma caused me to believe I was inherently bad and unlovable. I didn’t understand that feeling that way about yourself isn’t normal. I was too young to express myself, and even if I would have had the ability to, I would have been too afraid to do so – so I silently suffered. I just wanted to be loved and accepted, but I didn’t think I was worth it, and I didn’t believe any of the talk I heard at church about God loving people could be applied to me. Deep down, I secretly, and arrogantly, thought I was a special case.

As I grew older, my behavior began to change. I continued to carry that sense of shame and “unlovableness” into my teenage years, and at fifteen I really began questioning my family’s Christian values. I struggled to understand how things like “turning the other cheek,” “doing to others as I would have them do to me,” and other teachings of Jesus benefitted me in the real world.

At my high school those things just didn’t seem to “work”, and for an insecure, wounded kid whose greatest desire was to be loved and accepted, I was ready to try something else. I remember making a conscious decision about faith during that time – I decided that all the things my parents had taught me about life (that had mostly come from the Bible) couldn’t be trusted. I had to find other sources of wisdom, and who better to listen to than peers who looked like they had it all together or celebs/famous people who appeared to even more?

And so my life went in a completely different direction.

I chose not to worry about God and not to worry about the needs of others. I refused to listen to my parents’ teaching – that there is a God who is present and who loves me. Instead, I opted to follow the advice of worldly friends and voices from popular culture. Refusing to accept godly correction led me to do tons of stupid and harmful things I wouldn’t have done otherwise. I became addicted to drugs (for years), replaced healthy relationships with harmful ones, and used my gifts and talents to lead people far away from Jesus rather than to Him. In short, I became a destructive force for darkness in the world rather than an instrument of light – all because I allowed myself to be “rich” in unrepentant arrogance and pride and “poor” in humility.

No child ever says, “I want to be poor when I grow up.” The word “poor” is almost always used negatively in our culture, so it might surprise you to learn that it’s sometimes used positively in the Bible.

In the first part of Matthew 5:3, Jesus says, “Blessed are the poor in spirit …”

The word “blessed” means “happy” or “content,” and the phrase “poor in spirit” does not mean weakness in a negative sense. Being “poor in spirit” means a person doesn’t have an arrogant self-confidence that disregards the needs of others and their own need for God. Rather, a person who is poor in spirit is aware of their dependence on God for all things – for correction, sustainment, material blessings, and an ability to bless others.

A person who is poor in spirit finds ultimate contentment in faithfulness to Jesus, and nothing else will satisfy like that – certainly not worldly accolades, riches or success. The New English Bible says it this way: “How blest are those who know of their need for God” – that captures the thought behind this passage well.

In the latter half of Matthew 5:3, Jesus finishes His thought: “… for theirs in the Kingdom of heaven.”

In explaining why the poor in spirit are blessed, Jesus points ahead to the promise of God about the future. There will come a day when everything around us will be transformed – where everything is made right – no tears, no sickness, no elections, no tyranny – just us, the angels, the Father, the Son, and the Spirit in perfect unity and harmony.

It’s that future we’re to have in mind as we journey through life, and that’s really important, because what you think about the future determines how you live in the present.

When I was younger, I nearly wrecked my life because I refused to humble myself enough to believe what God says is true and to follow His words. I was the opposite of “poor in spirit,” and the truth is this is still a struggle for me, but I’m aware of it and I’m trying.

If you’re anything like me, then you need to know there’s only one cure for a lack of humility and dependence on God. The cure is repentance.

Jesus teaches us to be “poor” in arrogance, destructive attitudes, and worldly aspirations, but “rich” in humility, concern for others, and Kingdom-mindedness. He teaches us to orient ourselves toward a future where the only thing that will matter about our present-day riches and possessions is how we use them to build the Kingdom of God.

Are you following Jesus’s teaching to be “poor in spirit” well? If not, today is the day to start!